The hotel and health centre "Troparevo" invites you to celebrate the New Year in our restaurant!

We suggest that you spend an unforgettable holiday in the night when all dreams come true! Enjoy the dishes of the luxurious festive table! And plunge into the serene atmosphere of the celebration with Santa Claus and Snow Maiden !!!

A cheerful New Year's entertainment program awaits you: dances, competitions and a special New Year's menu from the Chef!

More in detail with our offer you can familiarize in section "Actions". 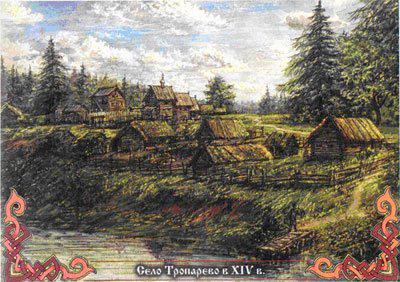 Village near Moscow Troparevo included in borders of Moscow in the second half of the XX century, has special historical roots. The idea of this settlement can be obtained from numerous archival documents detailing territorial features. The name of this town comes from the name of the owner of the village, which was in the period of its occurrence common. Troparevo there are several centuries, which leads to the presence in this area, many unique, from the point of view of history, of buildings. These include the five-domed stone Church of Archangel Michael in the style of "Naryshkin Baroque". A wonderful combination of familiar to the Orthodox churches of luxury decorative elements, largely similar to the elements of Western architectural buildings, has become a novelty for the people of that time. However, it is such a complex multi-tiered structure in consequence received public recognition, having received the name "Moscow Baroque" in the works of many researchers. Included in the limits of Moscow in 1960, the village Troparevo for two centuries was the preserve of the Novodevichy convent, which enriches this place is truly unique historical facts. Strict observance of Church holidays, deep faith is the qualities that for many centuries was characterized by the inhabitants of the village near Moscow Troparevo. Extant archival data allow us to exactly recover the history of the area in detail. Of particular interest is a Vague time that the village was ravaged. It was burnt wooden Church on the spot where later was erected the Church of the Archangel Michael. At all times this place was considered the Church that determined the need for its reconstruction, details of which can be found in the census and receipt books of the XVII-XVIII centuries.